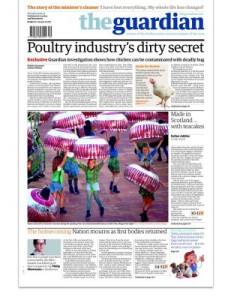 The government’s food watchdog has been forced to admit that an initial inquiry which cleared one of the UK’s largest poultry processing plants of hygiene failings was misleading.

Instances of chickens being dropped on the floor then returned to the production line, documented by an Ecostorm/ Guardian investigation into failings in the poultry industry, constituted a “breach of the legislation”, the Food Standards Agency has now acknowledged.

Read the full follow up report, including fresh allegations from whistleblowers, here