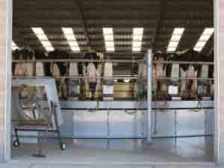 ‘YOU BETTER get out of here or your gonna get your ass kicked or worse,’ the leathery-faced farmer slurred, picking his words carefully as we pulled up outside his milking parlour. It was coming to the end of our first day in the US, and despite our best efforts to persuade the farmers otherwise, it was clear that journalists are not welcome in this part of the world.

Far from the glittering lights and well trodden-tourist paths that people normally associate with California, the vast udders of America’s dairy industry run through the Central Valley, a rarely-visited arid plain that stretches down the state, wedged in between the Sierra foothills and the Californian coast.

This is the breadbasket of the USA, where almond farms, grapes and corn are carved out of the scrubby desert and grown on eye-wateringly large scales. It is also home to the largest dairies on the planet, a concentration of several hundred milk farms so vast, that in Tulare county alone, there are over 900,000 cows, producing in excess of a billion dollars worth of milk each year.

But as a unique investigation carried out in conjunction with the World Society for the Protection of Animals (WSPA) has discovered, the Central Valley has also become a battleground for an unreported conflict, pitting community activists and family farmers against the might of mega dairy farms that have taken root here.

Read the full report and watch the film here.