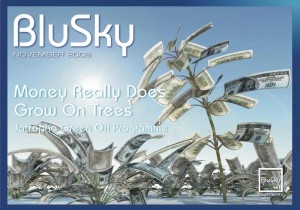 UK-based investment companies are marketing a controversial biofuel crop as “highly ethical and green” despite it being linked to conflicts over land, food security and growing hunger in developing countries, an Ecostorm investigation for The Ecologist magazine and The Independent has revealed.

The brokers have been criticised by environmental and anti-poverty campaigners for selling investments in jatropha because of increasing concerns over the crops’ impact on poor communities.

Jatropha, a bushy shrub which grows in Africa, Latin America and south-east Asia, is being touted as a “miracle” biofuel because the plants’ seeds contain a potentially valuable, non-edible, vegetable oil that can be used for biodiesel.

The investment companies are selling jatropha as the new “green oil” and claim it has the potential to alleviate poverty and improve livelihoods in developing countries. They also maintain jatropha oil offers a viable alternative to fossil fuels. One of the plants’ biggest benefits, the companies claim, is that it thrives on low grade, marginal land, and in semi-arid areas with poor soils, thus not competing with food production.

But, according to campaigners, the supposed benefits of jatropha are largely unproven, and the experiences of many farmers encouraged to plant the crop do not tally with the claims of the biofuel industry. Yields have fallen short of predictions, claim farmers, and agricultural land has been destroyed or converted for jatropha, threatening food security, impacting on livelihoods and displacing local communities. Promised incomes have failed to materialise, it is claimed, because of poor demand for jatropha seeds.

A new report out today by Action Aid links the expansion of industrial biofuels, derived from crops including jatropha, palm oil, soya and sugar cane, to rising food prices and increasing global hunger. The group states that growing demand for crops for fuel is putting them in competition with those grown for food, driving food prices higher and affecting what and how much people eat in the developing world.