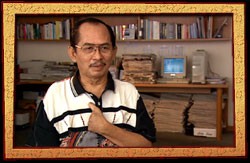 Virtually everything we buy, whether it’s food or clothing or household appliances or even holidays, comes with an ecological price tag attached. But there are other, unreported, costs attached to many of these same purchases: across the globe a growing number of brave and pioneering activists and journalists face danger and persecution – including violence, intimidation, harassment, censorship and even murder – as they tackle the social and environmental impacts of modern consumerism.

Whether it’s trade union activists in Colombia, fair trade advocates in West Africa, or anti-mining campaigners in West Papua, the risks are acute, and the stakes are high. Those tackling illegal logging and the illicit trade in timber face particular dangers. This logging costs the global economy US$10-15 billion a year, and there are clear links between deforestation and global warming, as well as serious social justice and human rights abuses connected to the trade.

So much of the struggle is being fought – in true David and Goliath style – between a small but brave band of activists and campaigning journalists and the criminal rackets profiting from the plunder of the world’s most biologically important rainforests. Those squaring up to these timber barons are paying a heavy price.

In the Philippines, last November, Aristeo Padrigao Monday, a 55 year old journalist, had his face blown off in front of his seven year old daughter in Gingoog City after investigating illegal logging for radio station dxRS Radyo Natin and the Mindanao Monitor Today. He’d been highly vocal about the involvement of local politicians. Just months before, in Phnom Penh, Cambodia, journalist Khim Sambo (and his son) were both gunned down in the street; Sambo, a reporter with opposition newspaper Moneakseka Khmer, frequently wrote about illegal logging, including the involvement of powerful government figures.

The two are just the latest in a long line of journalists and campaigners to be killed, injured or persecuted whilst tackling logging. In Indonesia the problem has become so acute that campaigners created a dedicated security network and emergency ‘helpline’ for those running into trouble. The move followed shocking cases such as that of Arbi Kusno.

The tireless exposer of the illicit timber trade was attacked by a mob armed with spears, machetes and hydrochloric acid and believed to be working for timber smugglers. Repeatedly stabbed and slashed, one of Kusno’s hands was severed, as was one of his ears. His injuries were so severe he was assumed dead and carted off to the morgue – only to regain consciousness en-route.

In Mexico in 2007, 20-year old activist Aldo Zamora was gunned down outside his home by assassins angry at the campaigners’ opposition to logging in the Tlahuica indigenous community. In Honduras in 2006, two forest campaigners, Heraldo Zúñiga and Roger Ivan Murillo Cartagena, were butchered in Guarizama by attackers working under the influence of a logging cartel.

The killings followed worldwide outrage at the brutal murder of rainforest activist Dorothy Stang in Brazil’s Para state in 2005 – the incident shone a rare spotlight on the huge dangers facing campaigners and, for the first time, put the issue on the map.

In February, the European Parliament voted in legislation to help combat logging. Under the proposals, European timber companies will be required to prove they are buying and trading legally harvested timber products within the Europe. Additionally, the measures will see stronger penalties for those flouting the law. National authorities will be given the green light to investigate those abusing the law and have the power to prosecute.

But whilst such legislation goes some way to curtailing the trade in illegal timber, much of the responsibility needs to rest with timber-hungry consumers. The UK spends a staggering £712 million on illegal wood products annually – the equivalent of some £11.96 per person. This appetite for cheap wood means the UK is now the world’s third largest importer of dodgy timber, after China and Japan.

Despite the plethora of eco-labelling and certification schemes high profile press stories and constant campaigning by pressure groups, British consumers appear to be addicted to cheap timber and blind to the chain of abuses that lie behind many timber products. Each weekend thousands queue up to purchase tables, chairs, cabinets, blinds and other similar, seemingly innocent and unremarkable items. Many are made from illegally logged timber, much linked to conflict, corruption and human rights violations.

In a matter of minutes, The Ecologist located online a myriad of products made from wood of dubious origin – snooker cues constructed from Ramin, listed as vulnerable by CITES; wooden floor tiles made of merbau, linked to serious ecological injustices; luxury yacht decking constructed from Burmese teak, supposedly subject to an EU-wide embargo following the Burmese regime’s brutal suppression of democracy protests.. the list goes on.

This is unacceptable. Those responsible for manufacturing, shipping, importing and retailing items linked to controversial timber sources need to be properly investigated and brought to task. But those ultimately fuelling the trade by continuing to purchase, without question, timber products made from dubious or illegal wood need to take responsibility and exercise restraint.

In this age of ethical enlightenment – here in the UK at least – there should be little room for complacency or ignorance. If we consumers can say no to factory farmed chicken, or sweat shop produced clothes, we can say no to cheap blood timber. Both for the remaining forests and those battling to expose their destruction – such as the brave individuals highlighted here – the consequences of continuing to ignore the providence of our timber are simply too great.

A version of this report first appeared in The Ecologist magazine http://www.theecologist.org